I've recently been bitten by "the bug" again so I've decided to try and finish a goal I started back in the late '80s.

I purchased my '66 coupe in '88 or '89 as a "placeholder" car as I couldn't afford what I really wanted at that time: A 1970 SportRoof, (REALLY wanted a Boss but yeah, that was going to happen!). Anyway, the car was solid and a good driver but nothing fancy as far as I was concerned back then. After looking around I realize that it really is a gem in that it's really solid and clean rust-wise so I guess it IS a bit of a find from what I'm seeing offered out there.

I purchased the car in the late '80s as I said before, because I couldn't find/afford a '70 sportroof. I purchased the car locally but the previous owner had brought the car from Colorado and done a light "casual" restore but then had to part with the car as he'd purchased a fastback and his wife made him choose one to keep. We decided to purchase this specific car because it was solid and had little-to-no rust on it. My grandfather was an upholsterer and the interior work that needed done was no major deal for him. Even the body work would have been pretty minor, just fixing the doors where the drain holes had caused rust and then a repaint.

As I said, this car was always intended as a 'make do' sort of thing, and after a while I started loosing interest in doing a restore or mod or anything really. All in all I probably put MAYBE 150-200 miles on the car since I've owned it, all of which were local. I never really felt comfortable leaving it in parking lots or doing 'daily driver' duty with it, though I drove it to high school a few times. The car has been garaged from the day I took ownership of it, so it has never seen snow or more than just a drizzle of rain. We started to do some prep work on the car's paint, you can see in the photos the 'distortion' in the driver side door.. That's from the sanding, primer and protective color coat we applied in anticipation of a full repaint which never happened. The paint needs buffed and polished but it's smooth and solid.

What I would really like is to trade straight up for a solid 1970 sportroof, preferably with a manual tranny. I'm not expecting anyone to offer up a Mach I or a Boss or anything rare, I just want to get into that body style as I have so many ideas and what not for it. Sure, I have a couple for my notch-back as well, but I have always loved the '70 sport roof best.

Now, on to the details and pictures:

*Steel Wheels - These are rusted pretty good and need to be replaced as they don't hold a seal very well. (visible in photos).

*Door Drain holes - there is some paint blistering at the forward, bottom corner of both doors. This condition was present when I purchased the car and has not gotten any worse since then. As I haven't touched the body in any way I am not sure the extent of the damage. It may just be a simple sand, treat, paint... or it may require new door skins. (Just trying to use a policy of full disclosure and honesty).

*Paint - The paint is good enough for a driver but it really needs to be redone correctly. The guy I bought it from had "casually" restored it and I _believe_ he cut corners with the quality of paint he used as this paint has become more of a purple color than the correct maroon color... I'm not sure if it'll come across in the photos or not, but it's still close to the original (so long as you don't park it next to a well done royal maroon paint job). Having said that, for all I know, this paint COULD be original, though I highly doubt it.

*Transmission - The C6 shifts good and makes no noise, though it does have a bad rear seal which it has had since I purchased the car. (again, attesting to the casual restore it got prior to my purchase). I have had the intention of replacing this seal for over 20 years now, but I just haven't found the time to do it. Any time the car has been driven it has gotten topped off with AT fluid so it has never been run without oil under my watch.

*Interior - Needs recovered. The thread is brittle and dry and has come undone on the driver's seat at the seams. This, I believe, is the original interior so it's over 40 yrs old and was a south-western car (lots of dry heat). Otherwise the interior is pretty good, though I believe the previous owner attempted to replace the carpet and, again, only did a 'fair' job of it. (there's a couple areas where the carpet doesn't fit quite right, but most don't notice it unless it's pointed out to them.)

*Body - solid with the exception of the front edges of both doors having some paint blisters.

*Frame - Straight and rust free from what I can tell.

*Rear leaf springs - New. I replaced them within 3 months of taking ownership of the car.

*Shelby spoiler - I added the front chin spoiler as I liked the way it looks. I took care to mount it properly so as to not cause any body damage should I decide to remove it later.

Everything else seems to be pretty good on the car. I felt it important to lead off and focus on the worst parts of the car so that no one would be deceived into thinking I was trying to say the car was 100% mint condition and original. As far as I can tell the plaques all match, number and item wise (tranny, engine, rear end, body color, interior etc...).

I can and will post more pictures if requested, specifically of areas that may need attention (doors specifically).

Photos:
(I really don't like how dirty the car is in these photos, but it has been in climate controlled garage storage for the entire time I've owned it. It's maybe seen a few light sprinkles but if it rained while it was out, it went right in the garage and was dried off with towels. The dirt is mostly 15+yrs of dust and cob webs.) 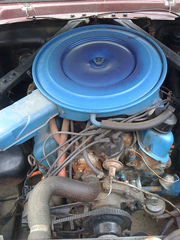 Please feel free to post any questions you may have and I will answer them 100% truthfully. I'm not out to dupe anyone, and I'm looking for a fair trade even if that entails some $ changing hands in addition.