paddyrk said:
And I appreciate it greatly, you may have seen this already but I went and grabbed the wiring diagram for the system I am using
Click to expand...

Here's the stock gauge test path. It will help you figure what is working and what isn't.

The red/yellow wire (power supply to gauge & sender) should have 12 volts when the ignition is in the start or Run position.

Troubleshooting the gauge and sender circuit:
Since the sender uses a variable resistor, sum the resistor values of 22 Ohms (empty value) & 145 Ohms (full value). That gets you 167, which you divide by 2: that gets you 83.5. So in theory, 83.5 ohms is 1/2 full. A trip to Radio Shack for the closest combination of resistors to make 83.5 ohms gets you one 68 Ohm (Catalog #: 271-1106) + one 15 Ohm (Catalog #: 271-1102) for a total of 83 Ohms at the cost of $2 plus tax. Wire the resistors in series to make a resistor pack and cover it with heat shrink tubing or electrical tape. The 83 Ohms is close enough to the 83.5 Ohm figure that it shouldn't matter. Disconnect the electrical connector shown in the diagram for the tank sender unit. Connect one end of the resistor pack to the yellow/white wire on the body side fuel sender electrical connector and the other end of the resistor pack to ground. Make sure nothing is touching that isn't supposed to and turn the ignition switch to Run. If I am correct, the fuel gauge will read 1/2 full, or very close to it. If it does not, then the odds are that the gauge or anti-slosh unit are bad.

How and why the test works…
Most of the fuel gauge failures give a stuck on full or stuck on empty as a problem symptom. Using a resistor combination that mimics 1/2 tank allows you to decide if the gauge and anti-slosh module are the problem source.

If the gauge reads about 1/2 tank with the resistor combination, that points to the sender as being the culprit.

If the gauge reads full or empty with the resistor pack in place of the sender, then the gauge or anti-slosh module is at fault.

Fuel gauge sender testing and replacement
The next steps require dropping the fuel tank and removal of the fuel level sender. Here are some useful tips...

I have done the tank removal three times, and the main issues are getting the car up on jack stands and getting the gas out of the tank. DO NOT try to do this job without jack stands. Becoming a pancake is not part of the repair process.

Pumping out the old gas:
If the old pump still works, you can use it to pump the tank out.
1.) Separate the pressure line (the one with the Schrader valve on it) using the fuel line tools.
Look in the A/C repair section for the fuel line tools. They look like little plastic top hats. You will need the 1/2" & 5/8" ones. The hat shaped section goes on facing the large part of the coupling. Then you press hard on the brim until it forces the sleeve into the coupling and releases the spring. You may need someone to pull on the line while you press on the coupling. 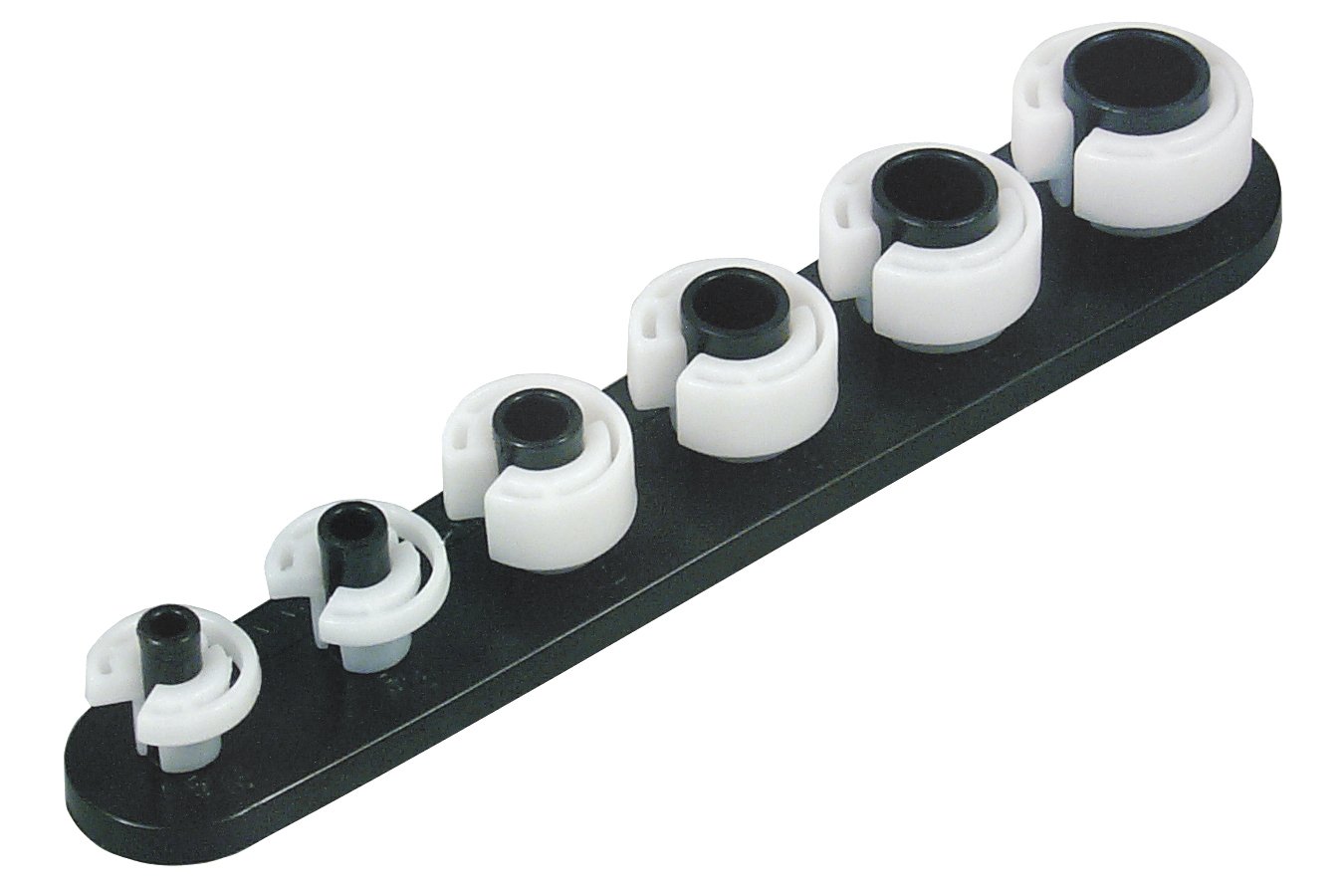 Use a piece of garden hose to run from the pressure line to your bucket or gas can. Make sure it is as leak proof as you can make it. Fire and explosion are not part of the repair process...

Turn the ignition switch to the Run position. the fuel pump will pump the tank almost dry unless the battery runs down first.

Some 5 gallon paint pails lined with garbage bags are good to hold the gas. The garbage bags provide a clean liner for the pails and keep the loose trash out of the gas so you can reuse it. If you decide to use a siphon, a piece of 1/2" garden hose stuck down the filler neck will siphon all but a gallon or so of the gas.

Remove the filler neck bolts and put them in a zip bag. Disconnect the supply & return lines by removing the plastic clips from the metal tubing. If you damage the clips, you can get new ones form the auto part store for just a few dollars. I have used tie-wraps, but that is not the best choice. Then you remove the two 9/16" nuts that hold the T bolts to the straps. Put the nuts in the zip bag with the filler bolts. Pull the plastic shield down and away from the tank. Once the tank drops a little bit you can disconnect the wiring for the pump & fuel quantity sender.

The fuel gauge sender assembly comes out by removing a large metal ring that unscrews from the tank. There is a separate mounting/access plate for the fuel pump and fuel gage. You are supposed to use a brass punch to tap on the ring so that you don't make sparks. Look closely at the rubber O ring gasket when you remove the fuel gauge sender.
When you install the metal ring that holds the sender in place, watch out for the gasket O ring. Some RTV may be helpful if the ring is not in excellent condition.

The tank to filler pipe seal is a large rubber grommet. Inspect it for hardening, tears and damage. At $20 from the Ford dealer, it might be a good idea to replace it.

I used a floor jack to help lift the tank back in place. You may find that it is the only time you really can make good use of a helper.

All resistance measurements should be made with the power off.

If the Ohmmeter or DVM resistance readings are way off, replace the tank sender unit.

Use extreme caution if you do the next step. Fumes from the gas tank can easily ignite and cause a fire or explosion.
With the sender unit out of the tank and connected to the body wiring harness, turn the ignition switch to the Run position. Move the float arm and the fuel gauge indicator should move. If you are very careful, you can use a pair of safety pins inserted in the connector for the yellow/white and black wires to measure the voltage as you move the float arm. The voltage will change, but I have no specs for what it should be.
Do not short the safety pins together or to ground. If you do, you may damage the anti-slosh module or crate a spark. A spark with the fuel tank open could cause a fire or an explosion.

If the voltage does not change and the tanks sender passed the resistance tests, the anti-slosh module or gauge is bad. I worked on an 88 Mustang today that had similar symptoms. Short version, I took the “anti slosh module” off of the back of the instrument cluster and replaced the electrolytic capacitor. Fixed it for $1.39 with a part from Radio Shack.

In an attempt to help other folks, here’s the long version.
Remove the “anti slosh module” located on the back of the instrument cluster. There was a single Torx screw holding mine to the cluster.

Find the electrolytic capacitor. It will be the largest, 2 wire component on the board. The capacitor may have a red or blue plastic wrapper on it. Mine was red.

The wrapper should have printing on it. Look for printing that looks something like this:
100uF+25V

If you can’t find the printing you’ll need to remove the part. You have to anyway so nothing wasted. However pay close attention to the way the capacitor is oriented on the board.

See www.Digikey.com for better capacitors – these are rated for automotive use and 105° C temp which is needed to survive the hot environment found in automotive electrical circuits.
P/N 4215PHCT-ND $2.10
OR
P/N 4201PHCT-ND $2.59

Be sure to get the lock ring and a new seal if you order the tank sender unit.
http://www.latemodelrestoration.com...ng-Fuel-Pump-Sending-Unit-Lock-Ring-And-Seal\

a91what said:
not sure without knowing how the holley is wired. trying to help on my phone is a pain. lol
Click to expand...

I took a closer look at the fine print in the I/O adapter instructions and found this, "IO10 has a 120 ohm series resistance and 1k pullup. This may affect your readings for 5V input mode with low impedance sources." I am not sure what this means, but maybe you do? Maybe I should try wiring the fuel sender ground to the dash's own power ground?

It's a simple voltage divider, if they are using a 1k pull up then your voltage differential is very small on the input.
Can you set the input to voltage rather than ohms? If you can I can help...

Looks like full the input voltage will be .983
Empty the voltage is .544
See if this works. If it does not try adding the series resistance to the ohmic value.

Of course this is just conjecture..

also information regarding it is found here.
https://forums.holley.com/showthrea...-fuel-level-on-Digital-Dash&p=78263#post78263

a91what said:
also information regarding it is found here.
https://forums.holley.com/showthrea...-fuel-level-on-Digital-Dash&p=78263#post78263
Click to expand...

Luckily for some reason after trying the same thing again it worked, just putting the pin directly into the adapter without the connector. I will have to calibrate the ohms since it does not seem realistic to what I expected and what I got as a reading from the multimeter. The system must have a +5v pull up for the sending unit.

Glad you got it working
Reactions: 1 user
Show hidden low quality content
You must log in or register to reply here.