Crap, didn’t realize my crotch was in that picture

DudeStang said:
Personally never tried buying anything on Facebook. Deactivated my Facebook back in September and couldn’t be happier.

I’ve bought multiple parts at decent prices and even two sets of wheels and tires for my 2014 on SVTPerformance. The Fox Body parts market seems pretty dead over there though, unfortunately.

I’ve had mixed luck with craigslist but I would also suggest checking out the apps LetGo and OfferUp. I found my fox on OfferUp and have seen a few people selling parts on both apps.
Click to expand...

I deleted my original account and it definitely made my life more peaceful. Unfortunately because of craigslist dying off, I've had to to create a burner account to use the marketplace.
Reactions: 1 user

Crap, didn’t realize my crotch was in that picture

02 281 GT said:
The Fox/Mustang parts market isn't dead, it just moved on from the forums.

I think one of the reasons this forum is doing so well compared to others is because of the core group of people that frequent it.

There is a huge willingness to help people who come in here with tech problems. People usually don't get talked down to or belittled unless they come in here with an attitude (or really bad spelling). The people who are here also aren't a clique. There have been plenty of members who have arrived, contribute a lot, and are welcomed as part of the forum in very short order. (e.g.: 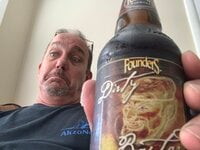 All the above has created an environment that usually causes the would-be d-bags to self-eliminate. It's also a product of the maturity level of the people who frequent this forum. A lot of older people who are still into or getting back into the Mustang game. Go back to some of the threads from the early-2000s and you'll see the difference in the discourse.
Click to expand...

Ahh the good ol days of Stangnet. Sometimes I dig up my old posts from the early 2000's just to remind myself how retarded I used to be. Humbling. Wasn't there a post counter? I feel like the higher your post count was like a stangnet status symbol, people would post on random nonsense just to add to their counter.

deathb4dismount said:
I deleted my original account and it definitely made my life more peaceful. Unfortunately because of craigslist dying off, I've had to to create a burner account to use the marketplace.
Click to expand...

Same here, I recently opened up an account just to keep tabs on my local mustang club for meets and such. My "name" is Ex-ssp. Facebook keeps bugging me, asking if it's my real name or a nickname.

Tell them it's your real nickname

I just ignore them. I know they won't lock me out because they gave me such a hard time about cancelling my real account when I cancelled that. They're in the business of getting as many accounts as possible.
Reactions: 1 user

A couple of comments here. Ebay died because it became way too expensive to use. It started out with a minimal percentage take for listings. Paypal was free at the time. Now facebook comes along, it's free, and everything has moved there. Right up until the point where facebook starts charging as much as ebay does. Wait for it, it's coming.

The Corral goes through phases. It's dead for a few years, then it's booming, then it's dead again. I remember when if you posted something on Corral, waited 30 seconds, and then hit refresh, your post was on the bottom of the second page. There's a few reasons StangNet stays so stable. It is fairly constant, although it has been slow here in the past before. If your question gets lost in the speed of posting so fast that nobody ever sees it, then it's worthless.

The people here are definitely the most friendly and helpful. I had an all time internet first just last week. Someone sent me a message with a phone number asking me to call them and help them with a problem. I'm just sitting here thinking, "That's not how the internet works!" But I resided myself to making the phone call, and it was a good conversation.

I just Googled Mustang World .com after Karthief mentioned it . It is a forum that just stopped in time..Now its just a time capsule .

Marketplace is the only reason i still use FB. Also, it seems there is many foxbody parts swap pages that appear to be thriving. I've been a longtime CL and eBay user. In the past week I've sold headers/h-pipe on FB, bought a MAF on eBay, and bought a power pipe on CL. I think the used part market is still there, but i haven't been in the fox game more then a few years. I'm basing that opinion on other vehicles used parts that I am into (harleys, jeeps ad trucks).

I'm sure I could sell the whole rear very quickly if I were in Maine. When I was there last year visiting my parents I sold a GT 40 intake I had within a day. Here on the island of Oahu, "Import lovers paradise", totally different ballgame.

***just realized I replied to this thread thinking it was my other one. Same general principals though..
Last edited: Feb 29, 2020

Yea, i suppose it's very dependent on location. I've noticed a much larger market for used parts in the south / Texas. Either way, sometimes you need to wait for the right buyer. I had a C&L maf posted over a year before it sold locally.
Show hidden low quality content
You must log in or register to reply here.

Is there a market for used gears?