New member with a new project

I was checking out your forum and it looks pretty interesting. I just got my hands on a ‘93 Cobra that’s been sitting under some trees for 15 years but it ran when it was parked. It looks like someone tried to steal it because the ignition switch is messed up, the dash u dear the steering column is broken off and some wires cut. It’s missing the distributor cap and something that was bolted to the fender near the battery which I think must have been the starter solenoid if they still did it like my old (Older than the 93) fords did.

Just wanted to introduce myself and say thanks for the add.

I’ll get some before and after pics when I take the pressure washer to it.
Reactions: 1 user

This is just after getting it in the garage haven’t done anything to it yet. 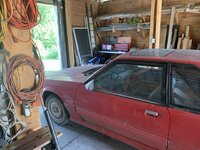