So I finally get to (re)join the Mustang club!

Hello, I'm Justan from Detroit ("What up doe!"). This past July 31st, I finally got myself (another) Stang! This time, it's a Fox, like I've wanted since I was just a boy. For all their quirks and flaws, I've been in love with the Fox since I was damn near a toddler, but it wasn't until the 3rd grade, when a young guy up the street from me with a beautiful two tone convertible set it in stone (think "Menace II Society" but instead of dark green it was dark blue), This guy would get together with his friends (who also had Foxes. One with a red two tone hatch GT and the other a grey or silver LX hatch) and race up and down the street, do donuts, compare sound systems or exhausts etc. I was hooked and that was when I finally put a name to these dream car: "Mustang". I'd heard the word a billion times by that point, but I didn't know it was "THAT" car.

25 years later (and eleven years after saying farewell to my money pit of an SN95), I've finally got the keys to my own 1989 GT convertible. 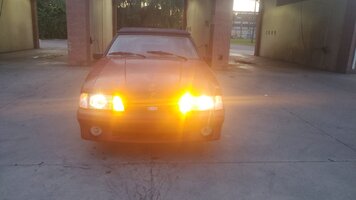 She needs paint, but the body is solid. And other than a few electrical and cooling concerns, she runs like she's supposed to. I've got tons of ideas, but right now I just want to get her running right so I don't end up stranded, which so far I have not, but I'm still gonna baby it until I know what all is going on with the ol' girl. I already planned on having to do some wrenching, which was one of the reasons I wanted one of these. It's given me something to do and I've learned quite a bit in just the few weeks that I've had her (studying these cars like crazy and lurking forums such as these, the past 20 years didn't hurt either ahem). Everything is relatively stock (or at least OEM) from what I can tell. Certain things I could tell haven't been touched in years, but again I was prepared for that. It can be frustrating trying to understand the whys and hows of this thing, but overall I'm having fun.

Anyway, I don't mean to ramble. Just wanted to introduce myself and show off my new baby. You'll probably see me around quite a bit, asking questions as I try to get this thing back up to speed.

Nuts fell off while driving

Hell yeah. Congrats on finally getting your Fox. Welcome to the forum.

It's nice to see another Vert being taken care of...I'm in the same boat in just trying to keep it mainly stock and reliable...maybe I can add some heads in the future for some more fun but so far it's just maintaining it as much as possible to keep it going as a daily driver.
Reactions: 1 user
•••
Show hidden low quality content
You must log in or register to reply here.

J
Anybody needing any advice on a convertible top replacement?

B
Finally got my mustang, and its a rescue.