As it says in the title, the car came factory with the Kelsey Hayes disc brakes. We're finally trying to get this thing moving under its own power for the first time in a quarter of a century. I'm trying to recall if it was running when I joined Stangnet.....

Anyways, we're (my 20 year old son and I) trying to get this thing moving under its own power by his 21st birthday which is less than two months away. I have acquired an '88 LTD 302/AOD that ran when pulled as well as an Explorer intake, and wiring harness, although we may just throw the 4bbl cast iron intake and a 600cfm Holley or the 4100 on there for now. Not trying to drive it on public roads, at least not out of our neighborhood (we live in the country, our side of the neighborhood only has one entrance and leads to 3 cul-de-sacs, one of which is a little over an 1/8 mile). I figure getting it moving under its own power will help motivate him. The 302/AOD is just a temporary means of propulsion, but if it moves, it needs to stop. I had stripped a '93 Mustang GT many years ago and had considered trying to use that, but it looks to be a bit more work tying it all in, the money saved will be spent in time and effort and I'm finally getting old enough that its not worth it.

He'd like to rebuild the original engine and pretty much make it stock, or at least stock appearing, a dual M/C is just a safe and reversible upgrade.

Most everything I've found is for power brakes which we don't want as usually they only work with automatics and this car originally had a three speed. I'm guessing the booster interferes with the clutch rod. Most everything manual is for drum/drum, or its just an ambiguous description. Maybe I'll just get a new jelly jar and when we get to the point it gets insured and tagged we'll change the brakes up.

After typing all this and searching on another screen, I found that Virginia Classic Mustang has a '65-'66 Dual Reservoir Master Cylinder Conversion Kit for Front Disc Brake or 4 Wheel Disc Brake (this worries me a bit) equipped cars, Item # BK3381 for $94.95. It comes with a 1" bore M/C, brake lines to attach to the factory 3 port distribution block, a plug for the distribution block as well as a union for connecting to the rear brake line. Now I see CJ Pony Parts has the same kit for $109.24 DBC3 or $119.24 DBC4, not sure of the difference. Just looking for simple and relatively inexpensive in case we change, but worthy of a permanent install. Its not planned to be a hot rod. Has anyone used one of these kits on their factory disc brake car?

Here's what I installed.

Use our Brake System diagram to help with your street rod brake system project. We also diagram both single flare and inverted double flare fittings for you.

In this case, they used a residual valve on both circuits...the front residual valve is much weaker than the rear valve to prevent the calipers dragging on the rotors.

All that being said...I simply wouldn't bother for a cruiser. Everyone always says the fruit jar is unsafe, etc etc...but the reality is that a dual bowl MC is only BARELY safer than a single bowl. The reason is simple, If you spring a leak in a single bowl master you lose all hydraulic pressure and 100% of your braking ability and if you only notice this when you are driving along at 80MPH and have to slam on your brakes, you aren't going to stop. If you spring a leak in the front brake circuit of a dual bowl master...you only lose 80% of your braking power...if you have to slam on your brakes, you STILL aren't going to stop before hitting something, you will just hit it 20% slower. That 20% might be enough to make a difference...or it might not. In the end, I have never heard of a fruit jar MC failing catastrophically and have rarely heard of ANY MC failing catastrophically. In a true brake system failure you are better off trans-braking and using the E-brake than you are standing on the brake pedal anyway(at least in a manual trans car)

Not sure how old you are @wicked93gs *, but I lived at the tail end of the single bowl MC era (I'm a '65 myself). You haven't heard of it because we've been out of that era for a long time, and we've become pretty spoiled over the last 50 years with ultra-reliable brakes. But they didn't used to be ultra-reliable. They failed often enough that automotive engineers decided to make dual bowl MCs standard equipment.

*Not intended to sound condescending

In post #2, Husky you posted "here's what I installed" and nothing, are you saying you left the jellyjar in place?

1320stang said:
In post #2, Husky you posted "here's what I installed" and nothing, are you saying you left the jellyjar in place?
Click to expand... 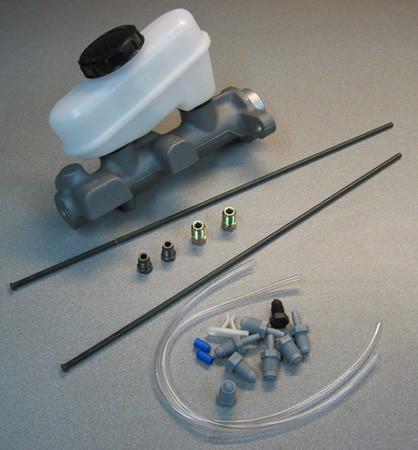 disc frnt is great. Mark VIIIIII or sompin MC fits FW holes & brake pedal PR, so direct swap in. Has frnt LARGER resovour (disc needs more) and a 2nd for back. No confusion w/PB, booster'n all that. No residual valve or proportioning valve.
I have an ol bronco so not directly applicable (more falcon like) but that's what I did. Swapped ina axle (frnt) w/the dana 44 chunk which has frnt discs but some use the early ford luxury (like I did for MC) for the rotors'n calipers...
This is Y I come here. The fellas can ID 4 us what Y/M/M is the application. The fancy Kit builders (CJ etc) just take these same prts, clean'n paint, assemble & tripple the price 4 us. If ur handy go 4 it ! Skip the kit, get acc the desk of any big box auto prts retailer. 30 yr old prts, brand new, on shelf @ autoZone, no order'n wait...

I'm just planning on a more factory looking M/C, like maybe the manual 1967 Mustang M/C for disc/drum especially since they were still the K/H 4 piston jobs like I have.

Speaking of which, I plan on rebuilding them, not sure of the quality of the cups right now, but lets say they're okay for argument sake. It seems rubber quality has gone to the crapper in the last couple decades, what is the best rebuild kit to get? Napa has a boot and seal kit for $20.99 for one caliper, part # UP518.
Show hidden low quality content
You must log in or register to reply here.