As a consumer, I prefer to hear tangible results from end-users. I don't like to do the whole info-mercial deal. So for this new product release, I'll tell you what's new with my personal car.

We had a little spare time while I was at the shop this week so we checked the contents of my UPR catch can. It was a previous generation design, but it was still full of oil and contaminants (7oz) after roughly 2,000 miles of street driving so it was working well. However, UPR has developed two newer generations of catch cans since I installed that can, so we went ahead and upgraded to the latest design.

My boss Joe has been obsessing over catch cans for the past year or two. He has studied countless different designs, fabricated many different style cans, and tested multiple cans on dozens of different vehicles. I doubt anyone has put in the same amount of Research & Development which Joe has invested into catch can design for UPR Products. His latest design is absolutely state of the art, and superior to any other can on the market. This is our "Dual Valve" design with four chambers. When you actually look inside other cans on the market, it is immediately apparent that there is nothing out there with a sophisticated design like ours: 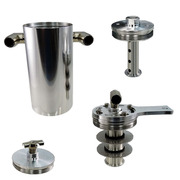 In addition to the four chamber design (shown above) which is extremely effective at trapping oil vapor, the new dual valve configuration allows it to draw from two vacuum sources. This is particularly relevant for boosted applications, like my ProCharged 2011 5.0. With this new can, we are able to use the blower inlet tube AND the intake manifold (with a check valve) as sources of vacuum. The intake manifold port offers a very strong vacuum source for the can until the engine is under boost. At that time, the check valve closes off the line and the can is able to draw a strong amount of vacuum from the supercharger inlet tube.

Following preliminary testing on my car, I have noticed more consistent vacuum on the boost gauge, which has aided part throttle drivability. At a 70mph cruise the engine sees 12lbs of vacuum, which is more than the previous level of 11lbs. Additionally, averaging my fuel economy over the 110 mile trip to work (each direction), the new can increased fuel economy by .4 MPGs. I talked to Joe after testing the new UPR Dual Valve Catch Can, and I expressed my disbelief at the improvement in drivability. His response was interesting. "Why do you think the automobile manufacturers invest in these PCV systems? It isn't for EPA regulations. An effective PCV system improves cylinder seal and aids part-throttle drivability. The only downside is the oil vapor which is ingested by the engine, but our catch cans remedy that problem!"

I have to say, I'm am genuinely impressed. I strongly recommend this can for any boosted application. The car runs smoother with the dual valve can, and it has already proven to capture more oil vapor than our previous cans and our competitors' cans in A-B testing which we've performed over the past year.

Here's how the system looks on my car: 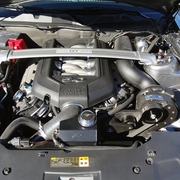 And here's a link to the dual valve catch can on UPR's web site:

A
Need your opinion vacuum leak or not