Who would think that motor mount selections for early Mustangs (1965-1970) could play a roll in your high performance Header selection?

Over and over we state on our website (rciheaders.com) that the engine needs to be in the stock (OEM) location if you are planning to install long tube headers. This can only be achieved by using OEM (or OEM style) engine mounts. The only issues with the OEM engine mounts is that FoMoCo no longer offers them. The correct engine mount assembly is a two-piece component, and they are still available. The first part bolts to the chassis and is called a "Motor Mount Bracket Assembly". If your Mustang is a little rusted in that area, you may need new ones, they are not expensive and very easy to replace. They are manufactured by Scott Drake (part number C6ZZ-6028/9-A) and are available from several Mustang Parts suppliers (most likely sponsors of this website) as well as Summit or Jegs. The engine mounts themselves (which connect the Engine to the "Motor Mount Bracket Assembly) are manufactured by Anchor Industries (part number 2257) and are also available through Summit or Jegs, and probably from other Mustang Parts suppliers. These components are duplicates of the OEM engine mount assemblies, and will fit 1965 through 1970 Mustangs with 289, 302, and 351W engines, and locate the engines in the stock location. Engine mount assemblies that do not meet the same specifications as the components I've listed MAY work, but also may NOT work, when it comes to header fitment. I have seen a lot of different kinds of engine mounts for the early Mustangs, some are really "pretty" billet assemblies, some are kind of trick looking, with urethane insulators, and then there are the engine mounts for the Mustang II conversions. They all look great, but I would not use any of them if I wanted to help insure the Long Tube headers will fit. 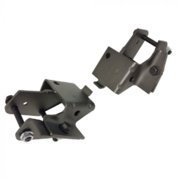 This is the actual engine mount. The thick rubber part is molded around the steel and is a one piece unit.

When you use the right pieces (like these), the engine will sit in the right location. For whatever reason, when people think about getting long tube headers (with primaries larger than 1 5/8"), they never think about their engine mounts. This never seems to be a problem with the FOX chassis Mustangs, only the early Mustangs, and the reason of course is that there is MUCH less room for headers in the early cars. 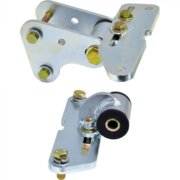 Here is a really neat engine mount set-up for an early Mustang. With all the adjustments to engine location available with this mount, who would ever even know where the stock engine location is? It's easy to slide the engine back toward the firewall, as it uses a slot, rather than holes. This is a good thing when it comes to road racing and drag racing, and a bad thing when it comes to header fitment. First, the header hits the engine mount, and second, the rear primaries hit the firewall. We have several customers that use this mount (if I recall, it's part of a Mustang II front suspension kit). Of course they notified us that the headers didn't fit, which required that they mark the interference areas with a Sharpie and sent them back to us be modified. They paid for that service, of course, they were just happy that we could modify the headers for them.

So, when it comes to installing (or purchasing) Long Tube Headers, the "selection process" should start with the engine mounts.
Last edited: Mar 17, 2020
Show hidden low quality content
You must log in or register to reply here.