Overview Updates (8) Discussion
The car is a 1988 GT. I've owned it since 2003, but it hasn't seen the road since 2009. Life got in the way and she sat on the back burner for a while. Earlier in 2011, I decided that I wanted to rebuild the car... the right way. It was always a solid "5 foot" car, but like many foxes, it had a lot of little quirks. Years of mismatched modifications and bolt-ons created a lack of reliability and performance issues. Not to mention the stock 100k mile bottom end had seen better days.

So, this is where I am now. Nothing but a shell and some jackstands. I'll spare all the boring disassembly pictures. After all, we all know how to take a car apart. It's the putting back together part that is interesting

I smoothed the engine bay a few years ago, but for some reason, the paint didn't take to the primer in some spots. I decided it's best to take it down to the metal and let my painter redo it all correctly. 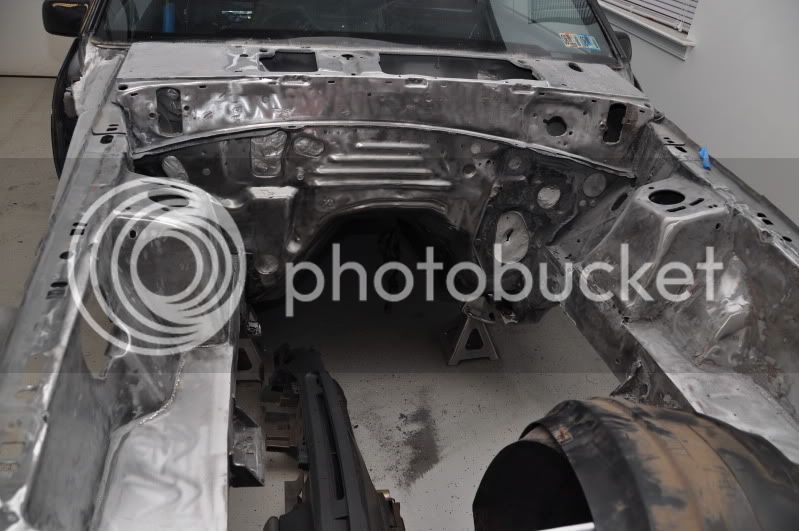 I rid the interior of the factory sound deadening. I'll be laying down my own at some point down the road. I'll explain the purpose of the racks in the rear seat area later on.

I'm still in somewhat of a teardown mode on the car. I need to clean up the interior a little more and then I need to strip the paint off the exterior. I have a couple of rust areas to cut and repair. Once all that is done, I'm building a rotisserie to flip the car on its side so the underside can get as much attention as the rest of the car.

The factory sound deadening was removed with dry ice.

So here is what the setup will look like for all the electronics. The large fused terminal block will be where all the sensors for the engine get connected. I'll be welding together a false floor frame that MDF and carpeting will eventually attach to. The frame will hinge after the roll bar mounts and I'll install some small gas struts so I can easily access the all of the components on the rack.

Found some filler in spots I didn't expect. The car must have been hit in the driver side rear quarter at some point in its life. It's not bad at all, just obvious that repairs were made.

I also cut out the rusted areas of the car. Luckily there aren't many. I knew the frame rail was bad when one of the stock k-member bolts looked like it was being chewed on by a rabbit for 2 decades. I'm going to have to weld in some sectons of pipe to replace the original reinforcements.

The footwells were bad enough to make me cut out some of the floorpan.

I'm glad I decided to cut open the passenger side framerail. Surprise surprise:

The supports were on their way out. Not as bad as the driver side though.

Cleaned it all up. Just have to order some tubing and metal plate to button it all back together.