If they were the same price, I would chose the NRC or LMR brackets over those.

I would prefer the bracket be fully connected, and not split like that to bolt into the backside of the flange. Seems less rigid.

however they are cheap, but I’ll spend the extra $$

I agree. That’s why I don’t like the mod to original sn95 brackets. I guess I was hoping to hear someone say they were solid, strong, and no need to spend 2x the price.
In the end, when the time comes, I will most likely go with the NRC.

It doesn't say how thick the bracket is or what material it is (or I just missed it). If the bracket was beefy enough I don't see a problem.

I used the stock SN95 bracket as a template and fabbed a bracket out of 5/8" plate (some beefy material I had laying around). Stock mount holes are marked. 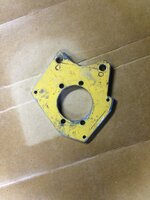 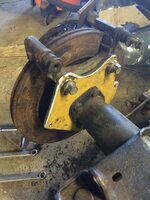 These mounted to the outside of the flange. The rotors are only 1.29" high so they are much thinner than the rotors used by most.

Shortly after I bumped into another member on a different Mustang site would had access to a water jet cutter and had scanned in the stock bracket. I needed the mounting holes moved 17mm away from axle centerline which he cut a pair for me. 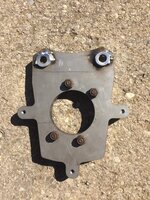 In the end I needed a washer for each bolt hole to better center the caliper on the rotor. I welded them on and ground down to near perfect.

That was my concern..... the thickness, especially not being solid all the way around.
Or is he just someone cutting these out of thinner stuff..... hoping to make a buck!
Show hidden low quality content
You must log in or register to reply here.

Can you find the engine in this Pic?

Anybody try these center vent pods ?

Anyone used this steering wheel adapter