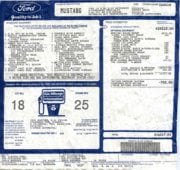 This Mustang was purchased new by my mother and owned and gently driven by her until she passed away two years ago. She always kept it garaged or covered. It is all original and in excellent condition inside and out. There are only three cosmetic flaws: a nickel size ding just above the bottom of the right door; and two cracks (3" and 1" long) in the LR taillight lens.

Its condition alone would more than justify the asking price, but when you look at the Features and Extras that are included it’s a bargain:

You can review more details in the accompanying window sticker.

I hate parting with this Mustang, not only for sentimental reasons, but because it’s a fun performance car and a real show stopper, equally adept at errands around town or long highway trips. Plus it’s incredibly reliable, in excellent condition, and comfortably fits my 6 ft. plus frame. But I have too many vehicles as it is, so it has to go.

Please respond to my post for more details or to schedule a visit. I'm located in Eureka, CA, which is about half way between San Francisco and Portland, OR. I'm planning a shopping trip to San Francisco soon (and maybe even to SoCal), so hooking-up there may be possible if you'd like to look the car over.

Is this still for sale?
S

Carguydennis said:
Is this still for sale?
Click to expand...

Yes it is. Let me know if you'd like anymore information or would like to look it over.
S

DAMN IT - Somebody buy this thing and give it a good home so I will stop obsessing over it. SD WItmess - you take payments? Trade ya my 90 EB Bronco and give you my kidney when I die

I'm working on trying to buy it.
It will get a spot in my garage and will always be kept in immaculate condition under the cover. Only driven on nice warm days!
S

VEHICLE ISSUES
​
Regarding needed repairs, there are none that I know of (and I should know since I’ve been maintaining the vehicle for the past 20 years) needed to fully enjoy this Mustang. It’s in that good of a condition. However, there are about ten issues (four functional and six cosmetic), all of which I would call minor or even trivial, which could be addressed when convenient and would make this Mustang functionally and cosmetically identical to when it left the dealer’s lot. Specifically:

-There is a latch for the center console (cubby) lid to lock it in place. The latch is fine but the plastic plate it engages on the underside of the lid is broken off. The simplest and most durable fix would be to screw a small aluminum plate in place of the missing plastic (since it’s on the underside of the lid no one will see it). I’ve never bothered to fix it since I prefer it as it is. For me, it’s far more convenient to simply flip open the lid without having to release the latch. The lid doesn’t flap or bounce, even over hard bumps, so I don’t regard the latch as necessary, just an impediment.​
Driver’s visor vanity lamp switch:

-Each visor has a lighted vanity mirror. I was checking all of the light bulbs on the vehicle yesterday and noticed that the lights for the driver’s side vanity mirror would only turn on when the actuating button for the switch was manually extended to its limit or moved to the side. These switches seem to be a common problem judging by online forums.​
-Repairing the switch itself should be easy. However, accessing it is problematic: the plastic frame holding it, the lights, and the mirror to the visor would have to be removed, a procedure not intended by the factory. It appears from some forum entries that the frame is held in by plastic pins pressed into the visor backing. They can be pried out but it is a delicate procedure and can break the pins.​
-Because of the risk of damaging the frame in the process of repairing the switch, and the fact that I never use the vanity mirror anyway, I’ve never attempted the repair.​
Coolant weeping at engine front cover:

-I’m suspicious that one of the elements (traces) in the rear window defroster isn’t working. However, I haven’t had the opportunity to determine that for sure (I seldom leave the vehicle out overnight uncovered). If it is a broken trace there are kits that make repairing it relatively easy.​
COSMETIC ISSUES:
​
Cracked light lenses:

-The front left indicator lens and rear taillight lens have cracks in them. The cracks are barely visible and do not affect the functioning of the lights. I’ll post photos of them for your review.​
Spider cracks in windshield:

-There are two spider cracks in the front windshield, both are smaller than the size of a penny:

-One has already been repaired, so it is barely visible. It is about an inch to the right of the center of the windshield, which puts it out of the driver’s view ahead.
-The second is about six inches to the right of the rear view mirror mount to the windshield, so it’s hidden by the mirror in the view of most drivers. Since I can’t see it while I’m driving I haven’t bothered to have it repaired.​
Dings in passenger door:

-There are two very small defects at the bottom-rear of the passenger door:

-One is a small dent (smaller than a dime)
-The other is a barely perceptible crease, about 1-1/2 in. long.​
-Both have been reduced as much as possible (without repainting the lower door) and blended with touch-up paint so they are barely perceptible (see the accompanying photos).​
Deteriorated trim paint:

-The black paint on the bottom and lower edges of both outside mirrors has worn off. Since the plastic underneath is also black the missing paint is hardly noticeable.
-I hope to repaint the mirrors prior to sale.​
-Drivers door handle:

-The paint on the driver’s door handle has faded and could stand re-finishing.
-I hope to re-finish the handle prior to sale.​
-Windshield wiper arms:

-Some of the flat black paint on the windshield wiper arms has worn off, so they could stand re-finishing.​
Scratches in cargo area:

-There is a line of scratches running along the plastic cladding at the rear of the cargo area.​
As you can appreciate, with only these few issues, most of which can be easily and inexpensively addressed, this Mustang is in excellent condition. With only a little work it could easily be upgraded to concurs condition and be competitive at car shows.